The Semi-final of the Odysseus II Contest for Pioneers and Explorers from Denmark, Sweden, Finland and the United Kingdom took place at Science Talents, Sorø, Denmark from Sunday 10th April to Wednesday 13th April 2016.  The contestants took part in a four-day Space Camp at the Mærsk Mc-Kinney Møller Science Centre on the grounds of the famous Danish school, Sorø Academy. The camp  included 3 nights in the Talent Hotel and  entertained and challenged the national Odysseus winners with science activities, lectures and competitions.

In the Pioneers category with four team competing the winners were Team MissionRed2030 from United Kingdom consisting of students Rebecca Hayward (15) and Eleanor Ivey (16) who both attend Hockerill Anglo-European College. “We are really surprised and happy. All the groups were good so we were lucky to win”, said a smiling Eleanor Ivey.  The judges especially acknowledged that Rebecca and Eleanor made a very nice presentation and had a impressing concept for traveling to Mars and eventually living there. “Team MissionRed2030 had the most artistic submission and most innovative solution”, the jurors stated.’

In the Explorers category Daniel Nilsson (23) from Sweden won with his project Safer firefighting by using Galileo data. “I’m happy to win, but also just to participate”, said Daniel Nilsson who studies at Luleå University of Technology. The jurors again acknowledged the concept as being very innovative and stated that Daniels project was the “Most professional presentation and most applicable project in the near future”.

“You are the future and this contest shows that we have a lot of space science talent in Europe, I’m really impressed by your projects and presentations at the semifinals here in Denmark”, said Kristian Pedersen director of DTU Space who handed over the prizes.  Although not all could win everybody were having a really good time with the four day program at the science camp. “I wish I could just stay here forever, it’s so exiting”, said Harry Woodhouse from The Royal Wootton Bassett Academy in the United Kingdom.

The accompanying teachers also felt that they could go back with new knowledge of space science and technology. “It’s been a really impressing program and the young people have meet each other and participated regardless of differences in age and countries. We should be doing much more international exchanges like this”, said teacher Guy Dinwiddy from Hockerill Anglo-European College.

Apart from the competition there were drone flying, rocket-calculations and launch, a visit to a nearby observatory and a number of speeches. Even the Danish sky provided inputs; The ISS flew by on a clear late evening sky over the lake at Soroe where the event took place. And teacher and astrophysicist at the camp Steen Jorgensen took out his telescope a focused in so all could see Jupiter and a number of it’s impressing moons sharp and clear.

Altogether there were 13 Participants in the regional semifinals at Soroe in Denmark coming from the United Kingdom, Finland, Sweden and Denmark. Four were distributed in three groups in the Explorers category and nine were constituting four groups in the Pioneers category.

In July the winners will go to Brussels for the finals and receive their prize – a computerized telescope.

All groups were honoured for their projects:

Winners: MissionRed2030. For most artistic submission and most innovative solution

Honoured: Team: evidence for Big Bang. For most ambitious project – you have a future in astrophysics

Honoured: Team Hime/Enceladus. For most original and challenging problem

Winner. Project: Safer firefighting by Galileo data. For Most professional presentation and most applicable project in the near future

Honoured. Project: ARTEMIS. For most comprehensive overview of current and future space technology 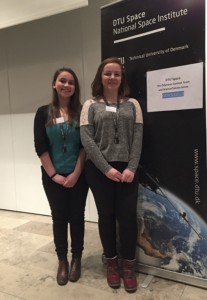 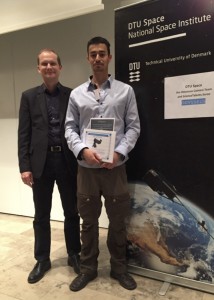 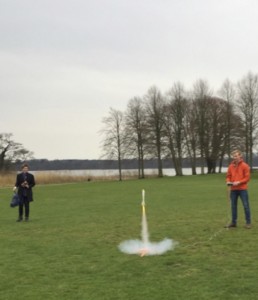 Rocket launch after calculations and production own individual rocket

The programme of events included: